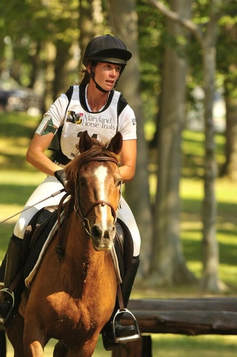 Kerra Johnson- Daughter of Kendy Allen, and member of the Chincoteague Pony Drill Team    since 1998. Kerra is owner and operator of Johnson Equestrian. She started riding before she could walk and participated in her first horse show at the age of three.  Originally from Lancaster, PA, she grew up riding in her local 4-H club. Her best childhood memories include riding and training Chincoteague ponies. Pictured left, is Kerra with her favorite Chincoteague pony, Cowboy (whom she trained) competing at a recognized event at the Novice level with the USEA.   Besides educating others, she continues her own education by regularly taking lessons with Molly Kinnamon (2009 USEF Eventing Developing Riders List) and participating in clinics with top coaches including Noel Clark (long listed for 2006 Canadian Olympic eventing team) and Boyd Martin (USA representative on the 2012 London Olympic eventing team).  Her appearances have included locations such as the Kentucky State Park, Fair Hill International, and Equitana USA.​ 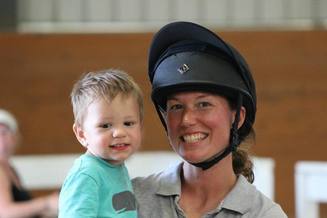 Katye Oshaben-Daughter of Kendy Allen and member of the Chincoteague Pony  Drill Team since 1998. Katye rode horses before she could walk. She was in her first leadline class at age 2, and despite all the other things that have come into her life, horses continue to play a major role. From a young age, she was an active member in 4-H and competed on local, county, regional, and state levels with performance and production (young halter style classes) horses of varying breeds. She had the distinction of taking Misty’s Black Mist to the Pennsylvania State Finals in working hunter-over-fences, which was the first time a Chincoteague pony qualified to compete at that high of a level. She also performed with Black Mist at events all across the United States, including a National Vet Symposium at Louisiana State University in Baton Rouge, LA.
She was one of the youngest members to ever compete and perform nationally on the Chincoteague Pony Drill Team, and continues to do so today. Her appearances have included locations such as the Kentucky State Park, Fair Hill International, and Equitana USA. 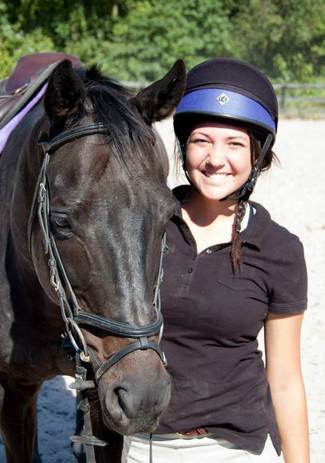 Georgia Allen- Wife of Kenneth Allen, Georgia grew up with horses in Pony Club and 4-H just 30 minutes from Chincoteague Island. She became more acquainted with the Chincoteague pony breed her junior year of highschool when she joined the Chincoteague Pony Drill Team. Since then she has been off to college, bought a Chincoteague pony of her own, immersed herself in the discipline of eventing- but always comes back to ride with the drill team. Her equine journalism degree from Wilson College allows her to freelance from the side, while she operates an equine boarding facility in Northern Virginia. 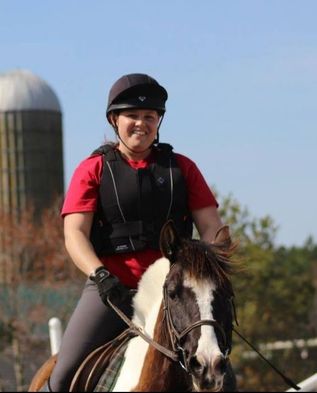 Emily Bayne- Member since 2011, Emily fell in love with the world of Chincoteague Ponies after riding one of her favorite ponies, Teaguer. Emily started training under Kerra Johnson in 2011, and continues to train under her today. Emily has done clinics with Molly Kinnamon, and performed with the drill team at the Chincoteague Pony Center, Fair Hill International, the Delaware Horse Expo and the Virginia State Fair. When Emily is not riding, you can find her managing Ruby Tuesday. Emily is also the proud mother to her three year old daughter and expecting a little boy in March 2021. 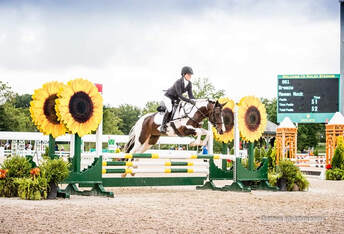 Megan Taylor- Drill Team member for 10+ years, Megan's favorite pony to ride on drill is Misty's Icicle. Megan is a proud owner of her very own Chincoteague Pony, bred by Kendy Allen, Breezy (pictured left). Megan is thrilled to be a part of the drill team and strives to show the world how special Chincoteague ponies are. In 2021, Megan and Breezy traveled to the Kentucky Horse Park, in Lexington Kentucky where they competed in the American Eventing Championship.  There they placed 14th, and earned the Adult Pony Rider Award in honor of Avery Dudasch. Megan's appearances include Fair Hill International, the Delaware Horse Expo, and the Virginia State Fair. 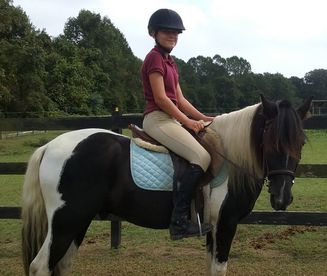 Sundene Lodge- Sundene has been riding ponies and horses for seven years and has been riding with the Chincoteague Pony Drill Team for three years.  Her favorite Chincoteague pony is Blackout. Sundene also spends time with the Harness Horse Youth Foundation and has driven ponies in harness races at The Meadowlands and Harrington Raceway. Although riding is one of her favorite pastimes, she also enjoys volleyball, surfing, and hiking, and she looks forward to a career working with horses in the future. 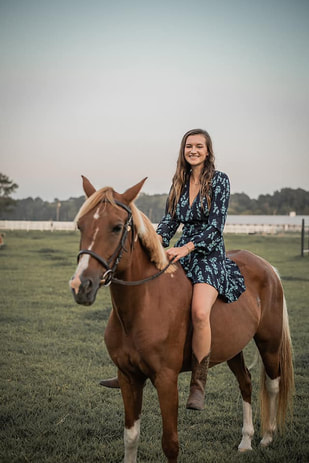 Allie Penland- It all started for Allie on her 8th birthday when she was gifted her very first riding lesson. Ten years later she is still passionate about horses. As a student of Johnson Equestrian, she fell in love with the wonderful breed of Chincoteague Ponies. She is grateful to have the opportunity to be able to work with multiple Misty descendants. Her current favorite to ride on drill is Misty's Moonshine (pictured left.) She also leases a Morab/Paint cross named Twyla. Her first year eventing Twyla, they qualified for the American Eventing Championship in Lexington, Kentucky September of 2021! Allie hopes to attend VA Tech and be a part of VA Tech's Eventing Team. She plans to continue her passion for riding through college. When she isn't riding, she enjoys participating in her school's swim, track, and cross country team! 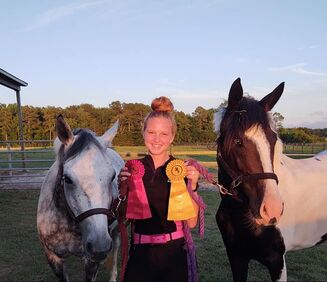 Regan Matthews- Drill team member since 2018, Regan has been riding with Kerra Johnson since she was 7 years old. She is now currently a working student for Johnson Equestrian. You can find this hard worker in the barn with a huge smile on her face. She fell in love with the Chincoteague ponies when she saw how diverse they can be... from trail rides to eventing, Chincoteagues are built for it all! Her favorite pony to ride on drill is Thor, aka Misty's Thunderstorm. Regan plans to attend college to become a Vet Tech. When she isn't riding or working, you will find her at church, spending time with her super cute dog, or hanging out at the beach! 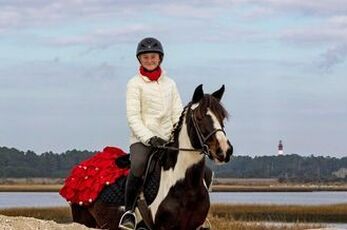 Bailey Edwards- Bailey has been riding with Johnson Equestrian for 8+ years. She is also a member of the local 4-h club. Her two most favorite Chincoteague ponies are Misty's Morning Glory and Surf N' Turf. Bailey and Surf competed at the Virginia 4H state show in Lexington, VA where they placed first in the Sr. Jumpers class. They also brought home a 2nd and a 7th in training level dressage. Every Summer you will find Bailey spending every free minute she has at the barn! She is so excited to be able to be a member of the drill team and show everyone how talented Chincoteague ponies are!